Major improvement works to the High Street and the pedestrianised shopping area of Northumberland Place in the city centre has been completed. The project is part of a larger public realm and movement strategy for the city centre entitled ‘Creating the Canvas for Public Life in Bath’. This will result in a series of on-going improvements to streets and public places across the city centre to be delivered over the next 15 – 20 years. The programme is guided by a set of Bath Public Realm Design Values that were developed and agreed with a wide range of organisations in the city.

The High Street Public Realm Improvement Project was the first project undertaken and was part-funded by the Bath Transportation package, a £27m package of measures funded by the Department for Transport.

The whole street was resurfaced with pennant stone paving and new street furniture was installed, with the aim of de-cluttering the space, increasing footfall and improving the experience for pedestrians.

A combination of narrow footways, busy bus stops and high footfall often resulted in overcrowding in the High Street and the quality of paving in pedestrian areas was poor. We have therefore:

After being approached by the Bath Preservation Trust, stone mason students from the City of Bath University spent four days cleaning and conserving the Rebecca Fountain, a landmark on the north side of Bath Abbey.

A lamppost dating back to the 1830’s and thought to be the oldest in Bath has been given a makeover in a community project. Residents in Sydney Buildings have worked with Council officials to restore the street’s 12 original cast iron lampposts and lanterns.

Southgate Shopping centre
The £2mil project to revitalise the centre with a mini park is now complete.

The Public Realm and Movement Strategy for Bath City Centre entitled 'Creating the Canvas for Public Life in Bath' was approved as policy in March 2010. This followed an extensive consultation process which demonstrated a high level of public support for the principles and proposals contained within the Strategy.

The Public Realm and Movement programme has been established as the vehicle to implement and deliver the Strategy.  The PRMS, Pattern Book, Getting Around Bath Transport Strategy and Placemaking Plan now form the basis for funding of future public realm projects both by Council and external funders such as Department for Transport, Local Enterprise Partnership and the private sector. 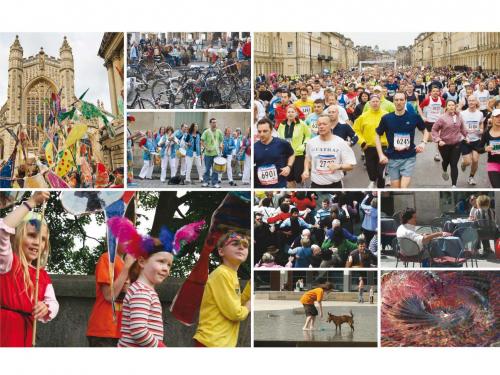 In recent years, the Council has developed a public realm and movement strategy, which sets out the key principles to transform the streets and spaces of Bath's city centre. The strategy accomodates the needs of a modern city while respecting the cultural and architectural heritage.

Bath's development and success as a city dating back to the early 18th century has been as a destination for leisure. With its Theatre, numerous restaurants and forthcoming casino development, Saw Close is highlighted in the strategy as the optimum location to build on this rich social history and create a lively and stimulating public area.

Saw Close as a shared space

Saw Close experiences low vehicle traffic but is a busy pedestrian area that is largely occupied by carriageway. It is now a shared space environment;  the road has been narrowed to slow vehicle traffic and encourage pedestrians to make more use of the space, helping to realise this area as a destination for cultural events, social activity and nightlife.

Features of a shared space environment include: